This exhibit honors and explores the connections of African American Baseball history to Hispanic cultures, communities and countries. Includes profiles of players and a timeline of baseball history. Negro Leagues Beisbol, a production of the Negro Leagues Baseball Museum in Kansas City, MO will be at the AAHM September 4 - October 30, 2021.

Over the next several months we are going to start promoting our upcoming exhibit, Negro Baseball League which opens Sept 4th. We want to share some history each week with you about the Negro leagues. Watch these short videos on various baseball topics. Chapter one is called "Chicken Wire". https://nlbm.com/storied/#chapter-1

The Springfield Race Riot of 1908

From its emergence in the late 18th century to its present day relevance, the black church has and will always serve as a safe haven for African Americans, a place to worship God together, and a place where we are motivated to rebuild our communities and strive for an enriched life.

In 1773, George Leila and Andrew Bryan organized the first Negro Baptist Church in the American colonies.  The church, located in Savannah, Georgia, is believed to be the first church established only for and by Blacks.

This exhibit explores and illuminates African American families who moved to Central Illinois in the 1800's and who have descendants in Springfield. The exhibit is the result of research and interviews done by board member, Elizabeth Alexander and volunteer, Patricia Davis. It was sponsored and funded by a grant from the Sangamon County Historical Society. No charge, but donations are welcome.

This exhibit features “The Door of No Return”, a special interactive audio-visual experience, designed by Jim Betts, an instructor at LLCC and retired Scenic Department Head at Paramount Studios. Included in the exhibit are figures designed by Alice Boykin, narratives on the history of slavery and the Middle Passage, as well as an artistic presentation of Mother Africa by Korbin “Kas” King. The exhibit is sponsored by the Rotary Club of Springfield South, the Springfield Area Arts Council, ALPLM, and LLCC. 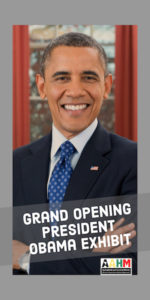 The Springfield & Central Illinois African American History Museum (AAHM) will host the grand opening of its President Obama exhibit on February 9, 2019. The exhibit will be open for viewing beginning at 10 am and the program begins at 5:30 p.m.

On January 20, 2009, Barack Obama was sworn in as the first African American President in US history. He began his political career in the Illinois legislature, then a US Senator from Illinois, and launched his successful campaign for the presidency on the steps of the Old State Capitol in Springfield.

Hailed as one of the greatest presidential orators in modern history, Obama has a knack for public speaking even his political opponents can recognize.  There are many excellent statements by Obama we can quote but here is one. “Change will not come if we wait for some other person or if we wait for some other time. We are the ones we’ve been waiting for. We are the change that we seek.”

Nia Odeoti-Hassan and Beverly Helm-Renfrow worked with then Congressman Obama in the Illinois Legislature.  They will speak to that experience. Others will speak to “Reflections on President Obama” and a portion of one of his most famous speeches will be played.

The African American History Museum of Springfield and Central Illinois salutes and honors King's legacy through a commemoration of his life, with a focus on the influences of his life, his profound writings and speeches.

NPR Illinois Interview
Doris Bailey, the coordinator of the Springfield and Central Illinois African American History Museum, was interviewed by Rachel Otwell of NPR Illinois on April 4, 2018, the 50th anniversary of the assassination of Martin Luther King Jr.  Click on the link below to hear this very informative interview, which includes a brief audio tour of our Martin Luther King exhibit.

This dazzling exhibit of object-enhanced oil paintings are dynamic and thought provoking. Artist Preston Jackson is more often recognized for his monumental outdoor sculpture such as the "Acts of Intolerance" located in Springfield's Union Square Park or "From the Cottonfield to the Battlefield" in Decatur. These paintings depict social interaction and encourage us to contemplate our own means of communicating.

The Journey to Freedom traces slavery in North America starting in 1600s, escalating to eventually encompass almost 4 million slaves in the United States alone prior to their emancipation. The exhibit describes how African Americans served the Union cause during the Civil War. The enlistees were assigned to segregated "Colored Troops". The contributions of many African American Ablolitionists including Fredrick Douglass, Sojourner Truth, and Harriet Tubman are described. This exhibit was developed by Robert Davis who also portrays Fredrick Douglass.

Author and documentary photographer Michael J. Bracey currently resides in Maywood, IL. His work has been published in various magazines, newspapers, annual reports, and purchased by many private collectors worldwide. His featured exhibition will include works from his books, “Africans Within the Americas” and his latest book, “Caras Lindas de Colombia” (Beautiful faces of Colombia), which was published in June 2018. 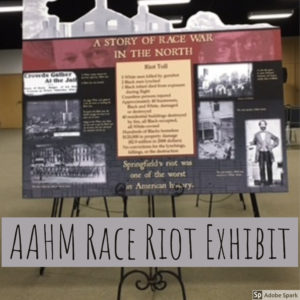 On the evening of August 14th, 1908, a race war broke out in Springfield, Illinois. Although six people were killed, thousands were terrorized, and hundreds of African Americans left Springfield, the event was almost lost to history. After the flurry of (biased) news coverage directly following the event, there was little said or written about it for nearly 80 years. Springfield has seemed reluctant to come to terms with its past. Slowly, efforts led by residents to hold the city accountable for the events of the riots have led to some successes, although many of its citizens remain oblivious to this facet of Springfield’s past. The riots led directly to the formation of the NAACP, and should be studied so that we can understand the mistakes of the past and look forward to a more peaceful future.

Panels are provided by the Abraham Lincoln Presidential Museum.

This exhibit of stunning black and white photographs by Eddie Winfred Helm (1911-1994), fondly known as "Doc" Helm, covers a broad range of people and places. During 50 years as the Secretary of State's photographer, Helm captured on film momentous events and occasions. During that time, he also photographed a multitude of everyday events, people and places. In this collection are political and sports figures, doctor's offices, lunch counters, nigh clubs, farm scenes a more. We challenge you to identify some of the individuals pictured. Helm's daughter, Beverly Jean Renfro, is generously loaning these photographs to the Museum.

The elite cadre of US Marshals was once the domain of white men only. In 1875 Bass Reeves was the first black man appointed a US Marshal and in 1877 President Lincoln appointed Fredrick Douglass a US Marshal. It was 85 years until the next African-American received an appointment.

Robert Moore was appointed by President Bill Clinton on October 17, 1994 and served until his retirement on June 29, 2002. This exhibit is curated by US Marshal Robert Moore and contains many items from his personal collection.

The "History Maker Banners" honor prominent Illinois African Americans. Visit the exhibit to learn of the significant contributions made by these exemplary individuals.

The Stories of Quilts

A timeless look at Midwestern quilts, their purpose and evolution. Early Sangamon County quilts made entirely by hand are displayed side-by-side with today's machine techniques.